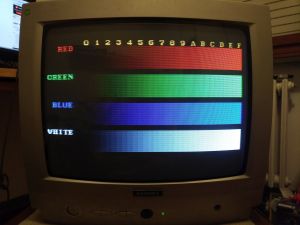 The Vestel 11AK36 is a typical inexpensive European mid-2000s TV. While the Vestel brand was (and still is) unknown to most outside the trade or the Turkish domestic market, it was rebranded by a lot of minor/sellout/store brands including Kennex (Coop), Silvercrest (Lidl), Inno-Hit, Roadstar, BlueSky, Sharp 14LT45C, Alba/Bush, etc.

Despite all of that, it is a solid performer, with a fair amount of configurability for its class (a mono, small screen model without east/west correction), partially thanks to the use of a higher-end video processor (STV2248) as well to the quality of the official firmware; most notably it allows for solving the common issue of CVBS and RGB pictures being displaced horizontally due to differences in processing time.

With or without RCA inputs.

4 or 5 buttons. (On the former, pressing both volume buttons acts as the 5th menu/back button, allowing for most features except teletext/source selection/channel management to be used)

An RCA input can be added if not factory installed.

A second SCART input (CVBS/S-video only) is theoretically supported, however additional switching hardware would have to be fitted and it is not clear from the schematic whether it can actually be driven by the CPU.

An internal inverter card for 12 V operation was theoretically available but is undocumented and apparently not fitted in any known unit.

Retrieved from "https://consolemods.org/wiki/index.php?title=CRT:11AK36&oldid=14339"
Category:
Cookies help us deliver our services. By using our services, you agree to our use of cookies.