From ConsoleMods Wiki
Jump to navigation Jump to search
DT-V1710CG 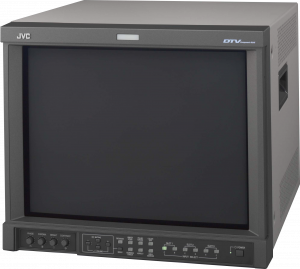 The DT-V1710CG was part of the last line of professional CRT monitor produced by JVC (together with the larger DT-V1910CG and the small DT-V100). Unlike earlier JVC monitors, the DT-V series used a flat aperture grill tube.

Because of it's fairly late release date the monitor is highly advanced, providing many geometry adjust functions in the standard OSD menu. This monitor is an HDTV capable monitor supporting 480i, 576i, 480p, 576p, 1080i, and 720p as well as the somewhat obscure 1080/24psF.

At the time of it's release in 2006, the 16:9 aspect ratio was becoming the new standard. JVC provided a plastic bezel with each DT-V monitor that masks the unused top- and bottom parts of the 4:3 tube in order to better accomodate a 16:9 picture.

A number of optional input cards were available, supporting component/RGB as well as various variants of SDI/HD SDI. A composite video / S-video card is also available. More information about the specific SDI variants can be found in the Operating Instructions of the monitor.

The monitor is rebranded by several other professional monitor companies, at least Ikegami and Panasonic (BT-H1700P). These rebrands share at least some of the same cards, but they're named differently. For Ikegami, the IF-C01COMG name is CPN-1700 and IF-C01PNG is CPS-1700. For Panasonic the IF-C01COMG is called BT-YA702P while the IF-C01PNG is called BT-YA701P. Cards should be interchangeable between brands. For servicing, finding a schematic of the IF-C01PNG is seemingly not easy, however the schematics of the BT-YA701P is shown in the service manual of the BT-H1700P, which should be identical to the IF-C01PNG.

Retrieved from "https://consolemods.org/wiki/index.php?title=CRT:DT-V1710CG&oldid=19661"
Category:
Cookies help us deliver our services. By using our services, you agree to our use of cookies.