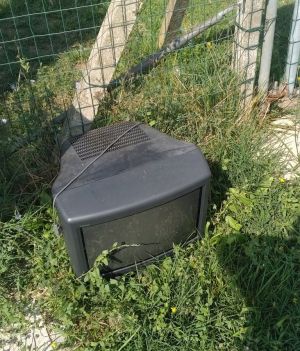 The Sony KV-M2180 (plus country variant suffix letter) is a lower mid-range TV with mono sound for the European market.

Eastern European (M2180K) models are the most featured out of the box.

Atypically for the brand, uses the Motorola MC44002P series of video processor with its distinctive AKB calibration lines (half normal half bright).

Sony tradition of Standby, Display/OSD/i+, 5, Volume+, TV/blank square. "TT--" preceded by enabled options appears on screen and a service function number can be entered, the input can be selected by the up/down/AV buttons, or Menu can be pressed for the settings (geometry, white balance, chroma delay, disabling 16:9 mode for sources like... Sony consoles that put out 5 V on pin 8, teletext character set, tuner model and calibration).

Picture-related settings are locked unless a valid 50Hz signal is being displayed; 60Hz modes use a fixed vertical overscan with respect to the former.

For the advanced functions (such as full EEPROM erasing: TT41), program 59 must be selected before entering standby mode.

Again as typical for the brand, apparently quite prone to excessive copy/paste and Engrish, the service manual contains a number of notable inaccuracies:

The PCB can fit a pair of front RCA sockets, however the case is unsuitable for their location and they would merely end up in parallel with the rear input.

The demodulator chip can be removed and replaced with a true independent input (replacing the tuner's).

NTSC decoding can be installed on unsupported (non-K) models by fitting X301 (14.32 MHz quartz) and C322 (18 pF SMD capacitor) next to the video processor towards the outside, and using service mode function TT19 to make "N" appear on the status line.

Some models (late production?) sold without teletext actually have a CPU fully equipped for it and merely need activation via service function TT18.

YPbPr input can be hacked on by connecting Y as regular composite and Pb/Pr to unused inputs on the color delay line MC44140 (pins 8 and 9) while disconnecting its pins 4 and 5 from the video processor and forcing them to the correct logical value.

Retrieved from "https://consolemods.org/wiki/index.php?title=CRT:KV-M2180&oldid=14328"
Category:
Cookies help us deliver our services. By using our services, you agree to our use of cookies.