From ConsoleMods Wiki
Jump to navigation Jump to search
TM-290ZE 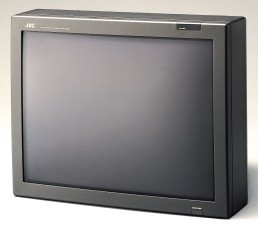 The TM-290ZE is a color video monitor made by JVC. This monitor was intended as a broadcast monitor. It has a 29" picture tube.

The monitor supports 480i/240p and 576i/288p video resolutions for all video inputs. It contains one composite input (INPUT A), one input which can be switched between Composite video and S-Video (INPUT B) and one RGB input which supports RGBs and YPbPr (RGB COMPO.). The monitor also has an output for INPUT A.

There are two external control terminals (EXT CONTROL) which can be connected to two external switches via a 3.5 mm stereo plug. The external control terminals can be used to power on/off the monitor, and to select an input. Furthermore the monitor contains one so called RGB Ys input which can be used to superimpose an analogue RGB signal on a video signal from INPUT A or INPUT B. This can be used for example to display an external subtitle video stream on top of a Composite video stream or S-Video stream.

There is a rack mount for the monitor which can be used to mount the monitor into a rack.

Retrieved from "https://consolemods.org/wiki/index.php?title=CRT:TM-290ZE&oldid=16903"
Category:
Cookies help us deliver our services. By using our services, you agree to our use of cookies.