From ConsoleMods Wiki
Jump to navigation Jump to search
TM-A140PN 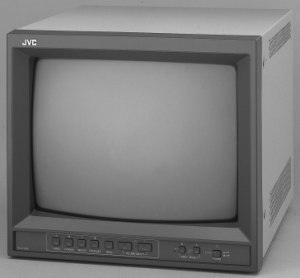 The TM-A140PN is a 14" low-end professional video monitor made by JVC. This monitor was marketed for broadcast, CCTV and educational applications. Like most JVC monitors of the time, it uses a curved shadow mask tube. The monitor has a fairly low resolution 14" tube with 320 TV lines.

This monitor supports 480i/240p and 576i/288p only. Two composite inputs and one s-video input are provided at the back, without an option for input cards.

This monitor only supports composite and s-video out of the box.

The jungle IC allows for RGB insertion, but the CPU will normally continuously disable RGB via I2C. It is possible to intercept the I2C and filter out the "disable" commands. Immerhax has made a guide on how this can be done.

Retrieved from "https://consolemods.org/wiki/index.php?title=CRT:TM-A140PN&oldid=21032"
Category:
Cookies help us deliver our services. By using our services, you agree to our use of cookies.